Notes from an Eastern Front 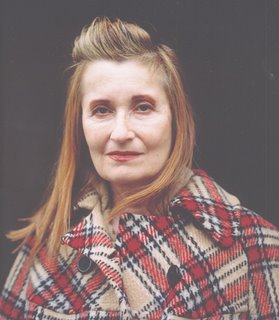 It seems Elfriede Jelinek had some trouble publishing her latest novel, Greed (in English translation). Once she did publish it, well, it got savaged:

A story of some sort emerges, but the thrust of the novel is really the most vulgar and stupid commentary imaginable about the murderous misogyny of men, the environment, the appalling taste of the kleinburgerlicher and so on. It is a novel to warm the heart of Viz's Millie Tant. Densely unreadable as it is, there is something terribly banal about every one of its intellectual propositions; as hopelessly banal in its attempted chic as its predominant present tense (The Telegraph). Read the entire review here.

I would love a review like that. Still, I don't think she has an American publisher. Her books are only available from Serpent's Tail, and Greed hasn't yet been released in this country. Lance, Ted, Lidia: this is our chance. Give her people a call, maybe Chiasmus, FC2 or Starcherone can pick up a Nobel Prize winner. Actually, I just wrote this as an excuse to post that photo.

That's certainly a face to launch a thousand nightmares, Jeffrey!

I did try to read one of Jelinek's novels years ago and gave up very quickly, lazy reader that I am. To say that her view of human nature appeared to be bleak and ugly is an understatement. Unrelenting bleakness was not what I wanted to read then and not what I want to read now. I don't need to be told how horrible human beings can be. Reading and watching the news, as suspect as reportage is, shows more than it tells. Having practically lived in courtrooms for many years gave me reason to be equally bleak, and so I got out of the courtrooms to save any glimmer of hope I had in the merit of life among homo saps and a wish for lyricism in a seemingly tonedeaf world.

But it's amazing and ironically heartwarming to me that a woman writer like Jelinek received the Nobel Prize, and I was glad to hear of it. I can't agree that I'd want to receive a review like the one you've cited. I wonder if she cherishes it and smirks, thinking perhaps -- those mainstream critics don't appreciate the intricate density of my style and my honest perspective of life on Earth. They want pretty toys and fantasy and how to's.

But then again, Jelinek's a Nobel. Is she more deserving of publication than the many gifted inventive and relatively unknown writers seeking to be published in a small number of progressive presses in Ameerica? Simply because her agent/s may be having problems selling her already published book to a big commercial Ameerican publisher? To me, the independent, progressive presses listed on this blog were born and grew up to promote the writings of the unknown and the lesser known of writers no commercial press would consider.

Eh? Am I missing something?

Dear Carol,
While I won’t answer your final (rhetorical?) question, I would like to take issue with some of the points of your post. I do understand not liking Jelinek (but that photo, with the Veronica Lake hairdo, the thick red impassive lips, the decadent cheeks and strong chin. . . ): it would be frightening to live in a world where everyone loved her.
However, I’m not sure I go along with you when you complain about her the “bleak and ugly” view of human nature. Her sentences are not bleak and ugly. Her irony is not bleak and ugly. The humor of her fiction is not bleak and ugly. The ‘music’ of her prose, even in translation, is not bleak and ugly. I will agree she’s unrelenting, I would argue she’s unrelentingly ironic. There’s no safe place in Jelinek where the irony stops (she approaches absolute irony, and for that reason alone is amazing). Your complaint to me smacks too much of a sort of “contentuism,” where we read fiction in order that the content uplift our souls. You say you want hope and lyricism from your fiction, and if you want the terrible news you’ll read it in the newspaper. No one would confuse J’s prose with newspaper reportage. And this implies that we can only find hope and beauty where the content is hopeful and/or beautiful, where the novel’s meaning is easily and satisfyingly apparent, where the book does not disturb us, but reinforces what we already know. Where a book gives us what we want. Can we call such a book “innovative”? Can we even call such a book “literary”?

I would like a review like that. If you can garner such negativity, it’s possible that you’re doing something right.

I’m also wondering about your final paragraph, that which states that essentially because she’s famous, that we shouldn’t worry about her publishing career. Leaving aside the part that being famous or not is beside the point, I essentially agree. I’m not worried about J’s publishing career. I’m worried about my (and my students’) access to her books. I think gender and style have EVRYTHING to do with the fact that she’s not yet been picked up by a major American house. She doesn’t write feel good-prose, her style is essentially political, and women writers have not really been allowed the trope of irony (or politics) throughout history (with few exceptions). Compare J’s work with that of Orhan Pamuk, for example (who oriented the last quarter of his career toward winning the Nobel and so became infinitely less interesting [compare The Black Book with Snow]): his books will always be widely available in the US, spreading his universal humanist message, while J’s don’t even have an American publisher. Jelinek’s books should not be published because she’s a Nobel winner, they should be published because she’s an important voice in contemporary innovative literature.

And that photo is so cool.

I only wish FC2 could bring Jelinek's unsettling and gorgeous work to Amerikan kultur, Jeffrey, but, alas, famous or not, rights for her books far exceed FC2's financial capabilities, and, for better or worse, FC2 has decided to commit our limited resources to innovative fiction produced in English in the U.S. I should think her project would be a no-brainer, though, for Dalkey.

But most interesting to me is the larger question behind your post:

What constitutes a "good" review, or, better, what is a review for and what should one be about?

I hate writing the snarky negative variety and try everything I can to avoid doing so, preferring instead to spend my review energies championing books I want the world to notice and read. That isn't to say I won't take exception to this or that execution, or argue with this or that assumption, or place a work in a critical (and, hopefully, thoughtful and revealing) light. But it's always struck me as an unhelpful pragmatics to spend one's time Ebert-&-Roepering fiction, especially the subset many tend to think of as avant-garde, or innovative, or eccentric, and which many refuse to read or simply don't even know about in the first place.

Dear Jeffrey --- I get your points, but the novel I started to read years ago did not strike me as ironic. It struck me as dead serious and unrelentingly ugly/bleak, period, maybe even sensationalistic. I felt no lyricism in the writing. That was "Wonderful, Wonderful Times." Perhaps if I read it now, I'd find irony and lyricism. If I can locate the book amidst the chaos on my bookshelves, I'll definitely return to it with an open mind. It's quite possible that my tastes have changed. But we all don't have the same sensibilities and takes on authors' writings, and we shouldn't have to feel that we must.

Sorry I gave you the impression that I only want to read about sweetness and light, triumph over adversity, and all that. I grew up devouring the stories of Guy de Maupassant and the novels of Thomas Hardy. Neither author is "uplifting." Neither is Jean Rhys, whom I also admire. I don't look at literature as comfort food. On the other hand, I admit to a longing for delight, as well as rich, intellectually challenging content and gorgeous, inventive, surprising language, which is in itself delightful; "hope" is the wrong word; I have little of that.

As I said, I was glad (heartened) to hear that Jelicek had won the Nobel, despite my personal experience. I'll be surprised if the book isn't available here eventually, whatever critics have to say.

Let me jump on the Jelinek bandwagon to hell. I also long for delight as a reader, and I find in Jelinek an exquisite species of delight -- I shiver when I read her. I used to think Thomas Bernhard was the annointed poet of loathing. Then I read Jelinek. Jelinek makes Bernhard look like Donna Reed. The constant punning (and I can only guess how much I'm missing reading the translation), the brutal eye for banality and convention, the unceasing wit (yes, good to hear this from Jeffrey -- I also think Jelinek is funny as hell, always as hell.

I made the point I think way back in the early summer (?) that Jelinek had no US publisher. I also went on at one point about a bad review of Houllebecq, another of my favorite contemporary writers. It's funny -- I think there are similarities between Michel Houellebecq and Jelinek: both are seen as misanthropes; both are unsparing, unconventional, controversial social critics. But Houellebecq it's possible to publish in the US because his unpalatability is in a frequented, privileged space -- he's a man writing a lot about sex. Part of his new book was excerpted in Playboy. I hold none of this against him -- a serious writer, which Houellebecq definitely is -- takes markets where they are offered; that is, I don't see him compromising to please Playboy, just intersecting with something they are interested in publishing. But there's no such American market for Jelinek. Hers is a truly radical, outsider discourse; hers is an art that's dangerous. By the same token that her negative review is delicious -- these people are so frightened! -- maybe it's a tribute to Jelinek that her books are unpublishable by Americans!

that picture makes me wet my pants.

i would LOVE for chiasmus to publish jelinek. anybody know how to proceed? jeffrey?

Evidently, Serpent's Tail, while based in England, owns North American rights. If you purchased the book here, I'd guess there would have to have been NA rights already sold.

I think this is more a symbolic issue than anything.