Open Letter to J.D. Salinger on the Event of his Literary Decomposition

Some years ago, and I suppose it was around the turn of the century--I received an email invite to contribute a one-page letter to a Letters to J.D. Salinger project, which, now published, will no doubt no receive a spike in sales due to J.D's passing.

Being a young, hungry, overeager, graduate student type with a need for publication, I dutifully re-read the red-covered tome, and, well, my reaction differed from my teenage reading of years before.

The first time, 10th or 11th grade English lit class---just after I'd realized English was more than grammar and handwriting--I was far from blown away. I enjoyed the book in the way one enjoys high school English books: Lord of the Flies, Brave New World, etc. I suspected then--like Nostradamus predicting his own commodification as a new age prophet--that the whole thing was merely a bit of calculated ennui from the business class.

No doubt my teachers really believed in the transformative power of the novel--nay, even the transgressive power--but I suspected that if I kept Holden's lessons too close to my vest, I'd be playing the rinsed-out high-school teacher myself in a few years: prattling on about the power of Walden and Emerson and Hawthorne and America's greatest white-boy hits to legions of America's largely ambivalent high schoolers. (Yes, I am now a college professor...)

[Note: most transgressive moment of high school. 9th grade health class. Ms. Kerkoff (I kid you not on the name) asks us to complete this thought--a way to jag us about our inner feelings: "Adolescence is like _____." The class makes shift to answer--stalls--stares at the clock, until a school mate (later to head into Naval intelligence of some sort, but at this point, an unrepentant rabblerouser), takes the floor: "Mrs. Kerkoff...Adolescence is a lot like a (long pause) Twinkie, because inside, for us all, there waits a creamy surprise..."]

Anyway, I figured the teachers meant well enough, but there was something about the supposedly subversive message of Catcher, handed to me on a silver platter, that read, well, more "phony" than the diegetic antics of Caulfield.

The re-reading, for the anthology project, made the book just seem, well, silly. Sure, it's well crafted, and yes, accessible in the cum-hither-late-modernism sort of way, but by the standards of the early oughts it seemed downright tame.

For me, longevity in a novel comes not from its increased relevance to the current social clime or its reasoned assimilation into the mainstream of American thought, but its continued belligerence--its pervasive refusal to make sense of the word or let itself be used a mirror.

Naked Lunch still fascinates me because it never lets you get handle on it--the book refuses to give up its secrets; it's not even a "novel," really, at least according to anything Salinger would have approached. (It's epistolary in its genesis: cobbled together from letters, also, as Oliver Harris would tell you).

I'm 3/4 of the way through Marcel Proust, for the second time, and the time-distortion of these ridiculous parties...where it takes longer to read than experience, where the Hawthorne trees speak to this boy-man who explores human depravity and manipulation for the sake of an aesthetic ideal...well, that stuff still works for me.

And so, I sent in my "letter" to J.D. to the editors, and never heard back. Good thing, too, since the piece took on a second life (with my musical partner in crime Don Meyer) in Mad Hatters' Review some years later, and after that, as a main track on our audiocollage release, Memorials to Future Catastrophes.

Here's the link at MHR: enjoy, read/listen if you like.

And, J.D., wherever you are, don't rest in peace--try to raise the roof a little bit. On second thought, maybe don't take the words of no college prof nohow.
Posted by Davis at 11:23:00 AM 1 comment:

Who is the Next Zachary Mason? 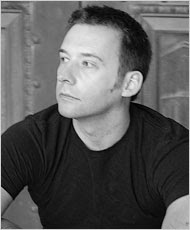 A year ago, the New York Times poked fun at Zachary Mason. He was one of those crazy authors that sent them wacky things in the mail, begging for reviews. Silly rabble -- reviews are for the well-connected!

A year and a half later, the NYT finally assigned The Lost Books of the Odyssey for review. Of course, first the book had to be published by a major NY house, Farrar, Strauss, & Giroux. The Times's primary job isn't to discuss literature, after all -- it's to support the beleaguered NYC publishing establishment. FS&G also got its cue from somebody else -- they picked up The Lost Books after it was nominated for a Young Lions Prize by the NY Public Library in early 2009. (Thanks, Brigid Hughes! Thanks, Ethan Hawke!)

The first recognition The Lost Books of the Odyssey received was when it won The Starcherone Prize for Innovative Fiction in 2006-7, a blind-judged manuscript contest offered annually by Starcherone Books. We've got our seventh such contest accepting manuscripts now, until February 15. Zach was winner #4.

> The Blue of Her Body, by Sara Greenslit (selected by Brian Evenson)

> The Creepy Girl and other stories, by Janet Mitchell (selected by Lance Olsen)

and forthcoming in Fall 2010:
Unclean Jobs for Women and Girls, by Alissa Nutting (selected by Ben Marcus)

Readers interested in what's new in contemporary fiction can purchase any of these titles, or subscribe to our entire 2010 season or 4 titles at a discounted rate. The Jack Kerouac Just Sent Mom Out for Another Bottle of Tokay Annual Subscription -- which this year includes three novels, Raymond Federman's Shhh: The Story of a Childhood, Leslie Scalapino's Floats Horse-Floats or Horse-Flows, and Thaddeus Rutkowski's Haywire, as well as Alissa Nutting's contest-winning short story collection, is only $49.95, ppd.

If you read books, this subscription is one of the best deals you can find -- especially when we see the Starcherone first edition/first printing of Zachary Mason's book now a coveted rarity, selling for over $100! When you wait for for someone else to tell you what's good, you pay for it.

Our subscription is also a very well-kept secret. As of today, and including our donors who get the subscription as a thank you for their contributions, we have a total of 22 subscribers! Meanwhile, The Lost Books of the Odyssey has crossed into amazon's Top 200 -- and it doesn't even get released until Tuesday!

Dear Friends of the Mad Hatters:

In case you haven’t heard the buzz, our journal has decided to hit the cyber-streets on an annual basis.

Please be forewarned that our open submissions guidelines for Issue 12 (next in queue after THE MAD BUNKERS MASH, due to emerge in early 2010) is now posted on our front page, in the usual place, namely on the sidebar: Submissions Guidelines (http://www.madhattersreview.com/submissions.html). We’ll be reviewing submissions sent to us from January 1st through 31st, aiming to publish Issue 12 in January or February, 2011.

We have some old and new and juggled about staff members, namely:

All of our contributors, past and almost past (the Mash issue will be up in early 2010) are welcome to let us know about recent publications. We’ll be happy to include reviews, as long as we find reviewers (hint); alternatively, if you have your own reviewer, we will consider publishing the review as an exclusive to our journal. Please send publication news to madhr.12@gmail.com, subject line: CONTRIBUTOR’S NEW PUBLICATION.


Please consider surrendering a bit of currency or gold to keep our unique journal going and save the publisher from Empty Pockets Syndrome. If you pay taxes to the US government, your donations will be totally tax deductible. Find the donations link on the sidebar of our main/menu page. Click madly with passion and devotion and you’ll earn warmest thoughts and appreciations.