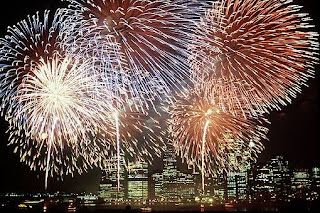 A very warm happy new year to all readers of and contributors to Now What, and many, many thanks for making this experimental conversation about experimental fiction the success it's been so far.

Back on 3 June 2006, one month after our launch, we had had 2,672 visitors. As of this morning, we've had 18, 804. We continue to see readers drop in regularly from around the country and from as far away as Norway, Turkey, and Australia.

Originally Ted Pelton and I conceived of Now What as a fairly stable entity. The plan was for us to invite a dozen or so innovative authors and publishers to be full-time contributors—and that, we figured, would be that. But this blog has proved to be deeply Heraclitean in nature. Because of time constraints, some of our initial contributors have had to bow out. Because of interest in our project, others have come aboard. Still others have remained more or less constant from Now What's inauguration. I suspect that this will remain the case, that Now What will remain a polyphony in process. I can't imagine a more perfect manifestation of its goals.

The same has seemed to prove true for Now What as for alternative prose and publishing in general—i.e., that there's a real and substantial audience out there for this sort of engagement, despite the fact that, as David Fenza, executive director of the Association of Writers & Writing Programs, points out in the latest issue of Poets & Writers, our culture has

entered an era of trickle-down belligerence to artists and the arts. Congress cut the budget of the NEA by 40 percent in 1996. The NEA lost resources with which it could support small presses and literary service organizations. Many states cut funding for their state and local art agencies. This also limited support for nonprofit presses and literary programming. Private philanthropic support for the arts, including literature, declined. In 1991, the arts received 8.4 percent of all private charitable giving; that giving fell to 5.2 percent in 2005. The advocacy group Americans for the Arts estimates this decline to be a loss of $8.4 billion in support.

Despite, in other words, that even relatively mainstream art has found itself under attack over the last decade and more, there remains a real and substantial audience for what we at Now What do, what we care about, what we stand for. The only problem, from what I can see, is finding increasingly effective ways to reach that audience. To that end, let me start the new year by making a request of you: please continue passing the words.

And here's to a 2007 that makes 2006—one of the most dynamic and diverse years I can remember in the field of innovative writing, apparent proof, in light and in spite of Fenza's sobering statistics, that this enterprise is never ultimately about money, but rather in many respects about the very opposite of money—look downright flat and faded.

Sometimes this feels like a first sentence.
Posted by Lance Olsen at 10:21:00 AM No comments: