How Opal Mehta didn’t make me one dime richer

OK, the others have adequately introduced the stakes, so I will change to another Now What channel:

Lost in the initial hub-bub over the Kaavya Viswanathan plagiarism scandal was the role of a company called Alloy Media and Marketing, and more specifically, its subsidiary, Alloy Entertainment, and its subsidiary 17th Street Productions—a cross-promotional marketing firm that helps create branded items to capture the lucrative youth market.

Viswanathan’s now-pulled book from Little Brown & Company, ''How Opal Mehta Got Kissed, Got Wild, and Got a Life," seems to have found its life through indeterminate help from the Alloy firm. David Mehegan of The Boston Globe notes that Alloy president Leslie Morgenstein claims: “no one helped Viswanathan write the actual words of the book that, it turns out, liberally borrowed from at least three authors.” Yet, I’m certainly not clear on what this “book packager” (17th Street Productions) does, exactly.

There are two cogent issues here: 1) Plagiarism/copyright (reports even link passages in Mehta to Salman Rushdie’s work), and 2) Book production/fabrication of the “Author.” The first angle is about as fresh as your father’s Oldsmobile, so let’s hit the second:

Viswanathan procured her $500,000 two-book deal as a 17 year old, without a finished book! There seems to be no complete story about how this all came about, but Motoko Rich and Dinitia Smith at The New York Times sum it up as follows:

“Viswanathan acknowledged that she had help conceiving the book from Alloy Entertainment, a ‘book packager.’ Ms. Viswanathan's parents sent her to a private college counselor, Katherine Cohen of IvyWise, who is also the author of a book on writing college applications. Ms. Cohen showed some of Ms. Viswanathan's writing to Suzanne Gluck, her agent at the William Morris Agency. Ms. Viswanathan said that she had written a piece in the vein of ‘The Lovely Bones,’ the 2002 best seller by Alice Sebold, but that Ms. Gluck thought that it was too dark. ‘They thought it would be better if I did a lighter piece. They thought that was more likely to sell.’

“No one at Alloy suggested she read Ms. McCafferty or any other author's work, Ms. Viswanathan said.

“The summer after graduating from high school, she wrote four chapters and a synopsis of what became ‘Opal,’ and sent them in an e-mailed message to Alloy. After some minor editing, Alloy said it would get back to her.

“In October of her freshman year at Harvard, she received a call from Ms. Walsh, also an agent at William Morris, who told her she was going to start shopping the manuscript around. ‘Two days later, she called to say Little, Brown wants to buy the book.’

I don’t pretend to have all the details on this complex transaction—but let’s call it just that, a “transaction.” A piece of business foiled, in this case, because one product infringed upon the proprietary realms of an earlier products. We should think carefully before we call these things, these objects, “books,” or anything remotely akin to the broadest and lowest definitions of literature.

[NOTE: Reportedly, Viswanathan signed up initially to work with IvyWise, a company packaging “raw material” into suitable college admissions materials. I wonder if they charge a half mil? Perhaps it’s a tax write-off.]

Don’t get me wrong, I’m not a literary snob (OK, bullshit), but I don’t want to see commercials at the movie theater, and I most certainly don’t want to read commercially produced texts that are in effect little more than commercials for an explicit commercial concern. Of course that angle goes against the pomo professor in me who argues incessantly about the commercialization of everything (no escape, suckers), and the attendant commodification of dissent (which Thomas Frank writes about so convincingly). You know, the fact that hippies were sell-outs from day one of the first freak flag commune. Or how some Madison Avenue wunderkind thought it would be great to sell a patchouli-smelling counter-culture to a bunch of Grateful Dead fans eating steak on a stick while watching to see if Jerry Garcia will get a boner and/or play “Dark Star.”

Don’t get me wrong, I love the Dead, and I’m humming “He’s Gone” right now, as I write this entry—but even the surliest, most jaded hippy has got to raise his eyebrows at $500K for nothing more than a target market.

Hey, call me crazy (like a fox), but this whole thing makes one hell of a book idea! Get me someone to work out the details...
Posted by Davis Schneiderman at 10:13:00 PM 4 comments: 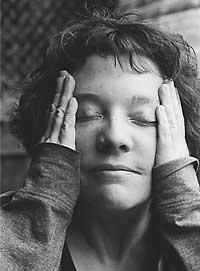 Ted's discussion of Spuyten Duyvil reminded me about something concerning a change in—or at least addition to—my own reading habits: lately I'm as likely to read by press as by author. I know chances are I can trust a book from, say, Coffee House, Chiasmus, or Wordcraft, and so I'll visit their sites for suggestions if the stack on my nightstand starts dwindling.

Three have delighted me over the last few weeks. First is Stacey Levine's novel Frances Johnson (Clearcut, 2006). It seems an exception to Ted's point about current innovative fiction being in some senses modernism's progeny, although in some strange ways Kafka's ghost does seem to be inhabiting a few of its stairwells. Imagine an episode of Twin Peaks, only on the page, and you'll have some idea of the slightly off-kilter otherness of the world Levine creates . The title character, an eccentric single woman in her late thirties, rides her bike furiously through a Florida town called Munson on whose outskirts a volcano, Sharla, fumes. A strange growth that looks like a cauliflower appears on Frances's thigh. The town doctor longs for a certain kind of chicken-beak oil for a remedy he's working on that will, it seems, cure everything. And when the quirky citizens talk to each other, their diction is as stilted, as vaguely unnerving, as the narrative universe they inhabit. Just as Frances clearly wants nothing so much as to leave Munson behind, Levine clearly wants nothing so much as to gently, ironically disrupt and leave behind the assumptions of realism's predictable plots, characters, and discourse. Why her work hasn't received more attention thus far is beyond me.

Next is Steve Tomasula's ambitious novel The Book of Portraiture (FC2, 2006), which does indeed engage with modernism's investigation of narrative fracture and what postmodern self-proclaimed surfictionist Sukenick once referred to as "the technological reality of the page," although it pushes those investigations much farther than did any modernist who comes to mind, and although its thematics land us a long way from, say, Joyce's or Stein's cornerstones. Tomasula explores nothing less than the history of representation, telling five vaguely interrelated stories—that of a desert nomad discovering the use and abuse of an alphabet; the Renaissance artist Diego de Velàzquez's struggle to rise to power in the Spanish court by means of his paintings; a psychoanalyst delving into, as it were, the x-ray portrait of himself he projects within a female patient; a group of contemporary digital manipulators caught in a complex (and often wonderfully funny) conspiracy (of sorts) in a universe of simulation and mediation; and, finally, a postmodern female artist whose oils are strands of DNA. What, Tomasula's fiction asks, does it mean to re-present "reality"? What is the nature and what are the limits of such an act, as it moves from sand to canvas to screen to inside our very cells? Embracing the idea of the book itself as wildly gorgeous art object, the text evinces colored pages, beautiful sketches, advertisements, photographs, experiments in layout and typography, and much more. One might imagine the whole, given my description, too cerebral by half, but that's far from the case. Several of the passages—one, for instance, involving the possible drowning of a little girl and her father's panicked attempts to locate her on a beach in the Middle East—are emotionally rich and rare. I can't say enough about it.

Finally, there is Patrik Ourednik's extraordinary un-novel Europeana (Dalkey Archive, 2005). Brian Evenson focused on it in a paper on post-genre writing he delivered at the &NOW conference Ted mentioned below. Since I hadn't heard of it before then, I picked it up. An alluringly unusual avant-historiography, Europeana recounts an absurdist's absurd (if all-too-true) history of Europe in a mere 122 pages by limning in childlike paratactic prose a wealth of atrocities, discoveries, movements, goofy facts, and goofier theories, all from a quirky bird's-eye perspective. The opening two sentences are emblematic of what follows: "The Americans who fell in Normandy in 1944 were tall men measuring 173 centimeters on average, and if they were laid head to foot they would measure 38 kilometers. The Germans were tall too, while the tallest of all were the Senegalese fusiliers in the First World War who measured 176 centimeters, and so they were sent into battle on the front lines in order to scare the Germans." Ourednik, a Czech who has lived in France since 1984, has invented a new form: the encyclopedic prose-poem built on painfully funny, painfully accurate non-sequiturs. Read it, read it, read it.