Chiasmus Press is proud to announce that Stephen Graham Jones' latest novel, The Long Trial of Nolan Dugatti, is now available on Amazon.com. Here's the back cover propaganda: 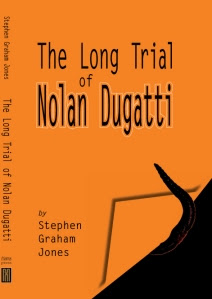 If there's a line between the real and the digital, between meat and the game, between past and present, then hold this book close to your mouth and whisper it into the pages. Please. Maybe the kid in there'll hear you. His name is Nolan Dugatti. He's lost, see, running down hall after hall, something both ancient and not-yet born galloping up behind him on a hundred legs, each individual footfall a sound he knows, a way of shuffling that he's always known. His father? Except it can't be. Unless of course this is another novel from Stephen Graham Jones. Not quite horror, not quite science fiction, but like his five or six other books, a story trembling at some pupal stage between meat and the game, where words will sometimes stop their crawl across the page and crane their neck around at the sky, nod about what they see there-you- then unfold their wings, drift up into another world altogether.

Check out Stephen's latest blog post here, in which he explains the method and madness of a novel written---yes---in a 72-hour blast of fright and delight.
Posted by Trevor Dodge at 8:35:00 PM No comments: