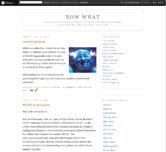 According to the results of a survey of nearly 5000 internet users released today by the PEW Internet & American Life Project, there aren't all that many surprises in answer to the question. But there are a few.

In an effort to continue our thinking about the digital beyond—and specifically the possibilities for alternative prose writers and publishers there—here are some of the highlights from the report: