“The Writer on Holiday”: A Lament in August

What proves the wonderful singularity of the writer, is that during the holiday in question, which he takes alongside factory workers and shop assistants, he unlike them does not stop, if not actually working, at least producing. So that he is a false worker, and a false holiday-maker as well.

I always look at August as the international month of  vacation, should one want it and have that as a  possibility. 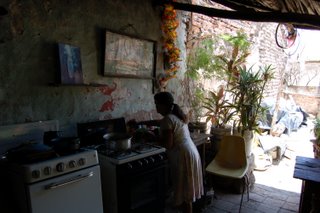 Vacaciones. This is the term that we agree upon, that is I and the two cousins, F and M. The Spanish term we agree upon in a kind of Spanish as I sit in the enclosure that is their kitchen, in Tequila, Jalisco, Mexico, is vacaciones. That is their term, our term, for my current state as I sit in the kitchen. In opposition, that is, to my wife, who is trabajaring in Georgia, as I explain in the infinitive. I do not speak Spanish and the cousins do not speak English. We are unlanguaged together. Prelanguaged? Relanguaging? I am searching for another word, a word for a sort of work, a sort of writing. The search is accompanied by gestures. This is good and archaic. Vacaciones, F suggests. Vacaciones is modern and nude. Vacaciones, M insists. It is a disguise, sleek as a 737, and I vanish. Si. Vacaciones. Sure, yes, porque no? And as far as they are concerned, and for simplicity’s sake, I am spending my vacaciones in their kitchen. I am spending counterfeit American vacaciones.

It is true, what Barthes said, that I, as a writer, am a false worker (rolled sleeves and dungarees) and a false holiday-maker (sunscreen and aloe). I have no word for me in their kitchen and I no longer have vacaciones. I am wondering if I am not also a false relative. False not in the sense of an impostor (though, for me, this remains in doubt until the cousins produce a 30-year-old photograph of my parents, F and M, lodged in a spiral bound notebook, producing also a not unpleasant vertigo), but in the sense of another order of deception: that I cannot, or have not tried hard enough to make it understood why exactly I am in this kitchen, what I will do to it and to these cousins. Cómo se dice “my institution has paid for me to come here?” I confess that they will be written, transcribed; confess, but not in those terms, nor in their Spanish approximations.

F and M curse me with their vacaciones. Vacaciones is a lesson. Here is a word to take with you on the bus back to GDL, on the 737 back to ATL. Repeat it: vacaciones. Now andale, cabron. Vaya bien. Vacaciones is the mobile state of the extranjero. Who in Tequila, where there is no trabaje, who in this enclosure has time for vacaciones? Only me, sitting around with his click in his hand, QWERTY under fingertips, eye to the keyhole, exactly as I’d planned. But there is time for my vacaciones (whatever that means) because there is no work and we are cousins. And there is sun and it is Monday. And there is tequila.
Posted by Unknown at 11:04:00 AM 5 comments: