a conversation with jeffrey deshell : part one 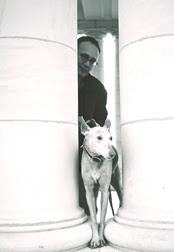 Lance: In his podcast interview with Frank Giampietro, R. M. Berry defines experimental fiction, essentially, as that which knowingly poses the question: what is fiction? Would you agree?

Jeffrey: So we don’t get a chance to get warmed up or anything, then, do we? R.M. and I had the briefest of conversations about this at the Attention/Inattention Conference at Denver University a year ago last fall. I have a couple of approaches to this question.

I’m curious, however, if we’re saying enough. Doesn’t all fiction, all literature, question itself on some very basic level? Isn’t even the most genre specific formulaic and trite mass-marketed trash, self-conscious? Doesn’t it demand (self)conscious (at least on some level) choice and effort to make a piece of writing fit the genre? Isn’t all writing, on some very basic level, an experiment? In the very act of writing, does anyone know, when they write the first word, what the last word’s going to be? When I wrote the word “When,” six words ago, did I know that the final word of the sentence would be “be”? No. And that’s just with a single sentence. Every word, every sentence, every page, every chapter etc.: all experiments.

Barthes wrote somewhere that writers are those for whom language is a problem. If you already have the solution before you start, it’s not a problem. This is something I’d like to ask a more traditional writer someday: do you really know how your sentence, paragraph, novel or chapter is going to end when you write the first word? One might have a general idea, a bright and shiny figure idea in one’s head, but in the translation to imperfect, dirty and stubborn language, doesn’t something get lost (gained)? Not to mention life getting in the way. The vicissitudes of writing something long, like a novel, when you have to live with the thing for years, and the kids are making noise, and you get sick, divorced, remarried, and it’s a nice day to go for a walk, and you want to watch all of Robert Mitchum’s movies, and you have to grade papers etc. etc. etc.: how can you say that you know what you are doing and what you will be doing? How can you say that you’ll know how your sentence will end? How can you say that’s not an experiment? So is it a question of degree or intensity?

On another hand, the word I’m most concerned with in the R.M.’s definition, and the one that causes the most trouble for me, is the word “is.” By saying experimental fiction is, aren’t we arresting its experimentalness, its contingency, openness and restlessness? Doesn’t the is stabilize the fiction, make it into a thing, into an object like other things? An object with use-value, with existence, with presence, with a status that is predetermined and fixed? This is why I objected so strenuously to the metaphor of fiction as architecture in a discussion a couple of months ago: can built (realized) architecture question its own existence in the world? I don’t see how (this could be my own blindness). To my mind, music, with its ephemerality, with its existence and yet non-existence, seems closer to literature. If we takes Berry’s definition seriously, the is is the first place we have to question. Does experimental fiction exist? Yes and no.

Still, on another hand, the western tradition often defines (advanced) human life as requiring self-consciousness, the ability to question one’s existence. I like that Berry’s definition connects experimental fiction with this human life, making it lively, open, animated, uncertain, indeterminate, indefinite. Experimental. Experimental fiction puts itself in play, as well as the self in play. And if we say that all literature is experimental, then let’s take that label off, and say that all Literature, indeed all Art (and I’m very invested in these terms), rigorously asks these questions: What is a text? What is a reader? What is a writer? Literature asks these questions (serves as the ax for the frozen sea within us etc.) while other, more “popular” forms of writing, do not.

Your turn. I know, from your posts and other writings, that you consider self-consciousness a key component to experimental fiction. How does your thinking differ from mine?

Lance: I very much like your troubling questions and caveats, think they’re right on the mark, believe in many ways we’re thinking along much the same lines about experimentalism—or, better, as I've mentioned here before, experimentalisms. Let me respond quickly to a few points you make, however, that may help delineate a few difference in our approaches. I don’t seem to be as convinced as you that all literature questions itself on some basic level. Or, perhaps, I want to assert that different sorts of writing ask different sorts of questions of writing. Authors of Harlequin romances, for instance, surely pose questions about genre to themselves, as you suggest, maybe questions about market forces, but for me the questions their texts pose are neither interesting nor enlightening about the nature of fiction and the culture/languages that speak through it. On the other hand, I don’t see a clear binary between experimental writing and whatever we might conceive of as the other thing. Would it be helpful, therefore, to think of experimentalisms as existing along a continuum? At one end, we would posit cookie-cutter texts like those romances; at the other, we would posit something called, say, Finnegans Wake. Other texts would then situate themselves somewhere in between.