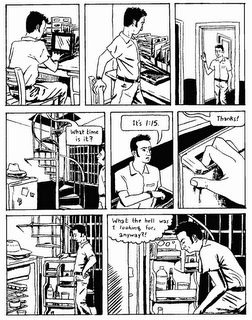 In 1947, Raymond Queneau—mathematician, poet, fiction writer, and member of the Oulipo group dedicated to using formal constraints imposed on one's own work as a method of generating creativity—published Exercises in Style. He took a simple story and told it in 99 different styles: as a letter, a sonnet, a moral lesson about The Youth of Today, etc. The narrative itself is wholly unremarkable: a young man gets on a crowded bus, complains about being jostled, and then sits down when a seat becomes available; later, the narrator sees the man who jostled him in another part of town talking to a friend.

In 99 Ways to Tell a Story (Chamberlain Brothers, 2005), Matt Madden performs a kind of homage to Queneau by doing much the same thing, only in comix. The narrative itself is, if possible, even more unremarkable than the original nonstory story: a man who has been working at a computer stands, closes his laptop, and walks to the refrigerator; his partner asks him what time it is from upstairs; he responds 1:15; then he bends in front of the fridge, looking puzzled, wondering "What the hell was I looking for, anyway?" Madden retells that narrative in a variety of comic-book styles, from a variety of points of view, in a variety of different settings, from a variety of different angles, with a variety of different characters, without one of the two leads, without the refrigerator, as a paranoid religious tract, as an existentialist parable, and so on.

The outcome is fascinating, stimulating, and a micro-education in both narrativity and the history of comix. Its mechanism of production is the simultaneous use and abuse the past, and its aesthetic impulse harmonizes well with what some of us back in the mid-nineties referred to as the Avant-Pop, a mode of telling that amibivalently accomodates pop culture while using many of its assumptions of comfort, predictability, and spectacularization against itself.

One of my litmus tests for a "successful" text is that it makes me want to go out and write. Madden's accomplishes that like few I've come across recently. And, to tie back into our earlier discussion of pedagogy and the difficult imagination, I'm guessing it might have a vibrant life in the classroom as well.
Posted by Lance Olsen at 6:57:00 PM 24 comments: