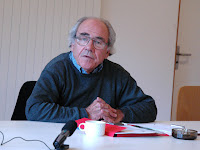 Jean Baudrillard, the remarkably influential French cultural theorist who argued, among other things over the course of his 50 books, that we live in an age of hyperreality where the real has been effaced by simulations of the "real," died on Tuesday, 6 March, after a long illness, at the age of 77.

I first ran into his ideas back in the early eighties, and simply couldn't shake them. They ended up infecting radically my speculative-fiction anti-trilogy, Tonguing the Zeitgeist, Time Famine, and Freaknest, as well as my recent novel Girl Imagined by Chance. Engaging with his imagination had the same effect on me as engaging with Barthes's and Derrida's. It was impossible not to feel, in some deep-structure way, that you'd left the Garden for good.

Here are a few excerpts from the Time Online coverage:

His interests ranged from anthropology to modern literature, film, art and photography, and he adopted many different styles of writing, from essay to poetry, from monograph to aphorism. Though not always clearly understood, his writing was influential across a broad range of disciplines that included literature, sociology, culture and media, and philosophy.

He was also an important influence on artists and writers — the novelist J. G. Ballard held that he was the most important French thinker of the past 20 years.

Jean Baudrillard was born in 1929 in Rheims, where he attended the lycée. His education was interrupted when, in the crucial year of preparation for entry into higher education, he abandoned his studies and, in his own words, “ran away” à la Rimbaud. He eventually returned to education, however, and spent ten years teaching German in provincial lycées.

In the 1960s he became a leading translator of German literary and philosophical works into French, while at the same time undertaking studies in sociology and preparing a thesis — influenced by the ideas of Henri Lefebvre and Roland Barthes — which would allow him to take up a university position.

This he did at Nanterre in 1966, at a time when left-leaning intellectuals were being increasingly radicalised in the wave of anti-bourgeois agitation that characterised the 1960s. His major publications begin from 1968. He continued to teach and to research in Paris until his withdrawal from academia in 1987. Thereafter he spent much time travelling and lecturing throughout the world and developing his talent as a photographer — his work was shown in several exhibitions.

Baudrillard’s career as a social theorist began with two substantial studies of affluent, modern society: The System of Objects (1968) and The Consumer Society (1970). These were followed by For a Critique of the Political Economy of the Sign (1972), where sociology, semiology and Marxist economic theory were combined. At the high point of the influence of Marxism in France Baudrillard thus contributed, against the more orthodox styles of Marxism, a recognition that a profound shift had taken place with the development of consumerism. His two studies of consumerism charted the emergence of a society dominated not by commodities as such, but by objects now consumed more and more for their image, or as he called it, their “sign-value”.

This transition to a system characterised by what he called “saturation” and “obesity," among other categories of his invention, made analyses based on scarcity, need, function and proletarian revolt redundant. It was soon clear to him that Marxism, like socialism, was part of the system it sought to overcome.

What distinguished Baudrillard’s response therefore was his search for a way of analysing modern societies that still remained radical.

Wikipedia offers a good overview of his life and work here.