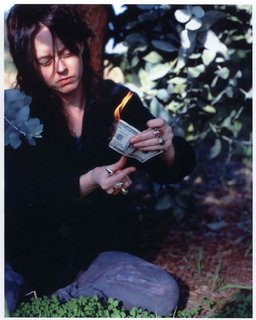 Profane Waste—Photographs by Dana Hoey and Essay by Gretchen Rubin. Gregory R. Miller Books, 2006. An appreciation more than a review.

I love art books. Oversized, glossy, shiny and smelling of that expensive color ink. I love Hoey’s photographs as well. Glossy, luxurious, decadent in that smart, Dangerous Liaisons way. It’s Hoey’s photograph of the woman burning the $100 bill that makes the cover of Peter: An (A)Historical Romance. I learned that it was a real $100 bill.

I’m working on an essay called “Jeder Engel ist Shrecklich: Dana Hoey’s Terrible Pictures.” The angel I have in mind is from Bernini’s “Ecstasy of St. Teresa.” (This sculpture is reproduced on the cover of Jacques Lacan’s Seminar XX: Encore and forms the basis of his discussion of feminine sexual pleasure in “Dieu et la Jouissance de la Femme”). What is curious about the sculpture is the disparity between the angel’s facial expression and the saint’s. While the mystic’s face reflects the described (and by now comprehensible) ambivalence between ecstasy and pain, sexuality and spirituality, the angel’s face is much more difficult to read, as it seems a combination of radically incompatible and transgressive emotions—among them bemusement, empathy, pleasure, beneficence, superiority and even disdain. The angel knows what he is doing: his smirk, his posture, the way he holds his spear lightly between his middle finger and thumb, everything speaks of an accomplished, almost Sadean manipulator.

The book’s essay (by Gretchen Rubin, author of something called Power Money Fame Sex: A User's Guide) delimits ordinary waste from profane waste, and then goes on to explore three “species” of profane waste: “Heedless,” “Defiant” and “Denying.” The essay is mildly interesting in a sort of chatty, anecdotal, intellectual name dropping (but not too intellectual) way. But the real interest is in the photographs. Hoey’s pictures, her frozen images, are at once static and narrative. They ask questions in time. Questions centered around the idea of futility, waste, transgression. We see a blind woman facing a sculpture with her back toward a beautiful view. We see a pig rooting around a trash can full of dollar bills, a young woman at table with a pile of cooked ribs, a cemetery statue adorned with gold jewelry, a pregnant smoker on horseback. These are pictures not only of waste, but of guilt. Another theoretician of the angelic, Walter Benjamin, has written, “It is not accident that Atget’s photographs have been likened to those of a crime scene. . . Isn’t it the task of the photographer—descendent of the augers and haruspices—to revel guilt and point out the guilty in his pictures? (‘Little History of Photography’).”

Hoey, like Bresson (I’m watching a lot of Bresson these days to see if he’s successful) tries to make the image real. Through narration, or the combination of the image with narration. Flusser explains it this way:

“Basically, therefore, photographers wish to produce states of things that have never existed before; they pursue these states, not out there in the world, since for them the world is only a pretext for the states of things that are to be produced, but amongst the possibilities contained within the camera’s program. . . It is not the world out there that is real, nor is the concept within the camera’s program—only the photograph is real” (Toward a Philosophy of Photography 84).

Use-value is important to some of what we’ve been discussing. Waste, in a sense, can exist outside or beyond ‘work,’ ‘value’ and ‘culture.’

The book is elegant. It’s not a waste.

More images by Dana Hoey can be found here.
Posted by jdeshell at 12:27:00 PM No comments: