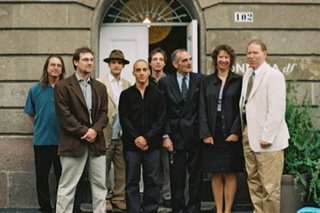 UNAM undergraduate (now grad student) Jorge Cuevas Cid put the entire thing together with little monetary support, no real interest in Burroughs among the faculty, and no direct contacts with any of the eventual participants. Amazingly, he managed to get an all-star roster of Burroughs scholars on board for a week of fascinating intellectual exchange and (sometimes drink-) inspired conversation.

Philip Walsh, of York University, co-editor, with me, of Retaking the Universe: William S. Burroughs in the Age of Globalization (Pluto Press, 2004), presented on the sociological manifestations of the Burroughs’ work in terms of self-identity, provocatively linking Burroughs and theorist Julian Jaynes, whose idea of the bicameral mind—where earlier human brains literally heard the voice of god commanding their actions—provided a fantastic entry point into connections between Burroughs and consumer identity.

Rob Johnson, of University of Texas—Pan-American, working on both La Frontera and the Beats, rehearsed the excellent argument of his new book, The Lost Years of William S. Burroughs: The South Texas Beatss. The text argues for the significance of the Valley (an area of South Texas) to the Burroughs canon. In many ways, this was a sociological study as well—connecting Burroughs with the “wetbacks” he employed as a farmer in Pharr, Texas, and more broadly, to his later experiences in Mexico City. Also, a highpoint was a great video interview with Ted Marak, one of the Texas “beats,” who was present on September 6, 1951 in Mexico City at a very significant moment in literary history (more below).

Oliver Harris, of Keele University, perhaps the most important Burroughs scholar of the last decades, continued his keen attention to manuscript history, arguing that Burroughs’ first three novels (in terms of writing, not publication), Junky, Queer, and The Yage Letters, actually focused more heavily on Mexico City than previously realized. Harris uses archival research to justify his argument, and proposes, that if the economics and publishing history of Burroughs’ early writing years (1949-1953) had been different, the as-now-understated Mexico connections would completely change our sense of this period in Burroughs’ work.

Katherine Streip, of Concordia University in Montreal, offered a very cool paper on the Burroughs and cut-up inspired music, art, and other DJ-culture overlaps. Her connections, particularly, with avant-garde transactions of the last 50 years, helped reinforce Burroughs’ pop-culture credentials without retreading his over-analyzed mainstream collaborations.

I discussed Burroughs’ cut-ups as not only a harbinger of later media experiments, but as tied to earlier tradition of user-intervention in book consumption. Specifically, I traced the work of Newberry Library benefactor John M. Wing in his practice of extra-illustration—the insertion of images, book pages, pulp-materials, and portraiture into separate books, expanding those books into multiple re-plated volumes. This links up with Burroughs’ use of a specific newspaper page, The New York Times front from Sept. 17, 1899, and the spread of selected phrases through his small-magazine cut-up production of the mid-1960s.

Allen Hibbard, of Middle Tennessee State University, spoke on Burroughs as literary and cultural saboteur, with evocative discussion of many theoretical couplings, including that of the Isma’ili renegade, Hassan I Sabbah, a twelfth-century figure of great importance for Burroughs and his collaborator Brion Gysin. Sabbah perfected the art of political assassination, and for Burroughs, became a representation of an alternative society set against the stultifying norms of the mainstream.

Jeffrey Miller, of Cadmus Editions, discussed the brouhaha over his publication of Tom Clark’s The Great Naropa Poetry Wars (1980) an attack on Chogyam Trungpa and the Naropa Institute, and his contract with Burroughs to shortly after publish a collection of the latter’s work called Early Routines. In a complex and thrilling narrative about the book business, the influence of Allen Ginsberg, and Burroughs’s own commitment, ultimately but not easily, to free speech, Miller—one damn fine storyteller—held the house in thrall.

And that’s not all—the Mexican audience at UNAM was fantastically responsive, responding to the papers in way that justified Jorge Cuevas Cid’s sense that Burroughs should be brought back, once again, to Mexico.

The conference, as I noted above, took place 55 years after an important literary event—Burroughs’ accidental shooting of his common-law wife Joan Vollmer in the Colonial Roma neighborhood of Mexico City on September 6, 1951. The stories of her death are multifarious, and what was apparently a William Tell gag gone horribly wrong, hung, like a spectre, over the entire wonderful week.

One of Harris’ next projects is Everything Lost: The Latin American Notebook of William S. Burroughs (forthcoming from Ohio University Press in 2007), and the title alludes to the fact that Burroughs came to Mexico on the run from the US law, with problems, no doubt, but with his family intact, and with some measure of hope for living a life free from control. After Joan’s death, the situation seemed much different.

Want to hear more? The group will look to publish the conference proceedings in English and Spanish. 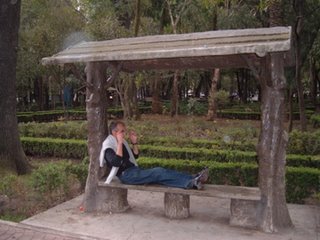 Jeffrey Miller on one of the stone benches mentioned in Burroughs' novel Queer. 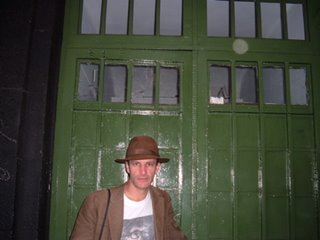 Oliver Harris at the door of the apartment building where Joan Vollmer was shot.

Davis:
I want to get my hands on the publication. When & where available?

very cool. very jealous. in the good way. davis, you are a rock star.
lid

Thanks. We are still working on the venues for publication. More later on this.

As for my incipient rock star status, I shall only blog about green m&m's.

Any word from Oliver Harris on when the next volume of Burroughs' correspondence will be published? We've been stuck at 1959 for almost fifteen years.

Harris is in negotiations about these, but unfortunately they are still some years away...