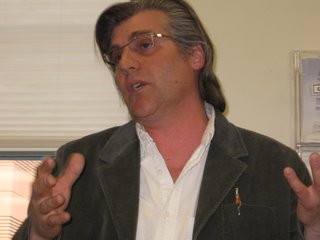 What’s paradoxical and bizarre and strangely wonderful about our present moment to me is that, at the very time when corporate control paradigms would seem to be the most oppressive, it has suddenly also become possible for individuals – yes, remember them? – to make a mark on publishing and written art in a way one would think was so quixotic as to be practically insane just a few years ago. It’s hard to get real numbers from the big publishers – I can’t afford Nielsen Bookscan, which monitors sales for the industry. But an industry exec recently said that 90% of fiction titles for which there had been ISBNs issued (so not chapbooks, but trade paperbacks) currently sell fewer than 1,000 copies. The dying print fiction publishers of New York, by and large, aren’t selling any more books than small presses. Several small presses started in the last few years by sole proprietors of one sort or another -- and see Lidia Yuknavitch’s Chiasmus ad below as well).

A case in point is Tod Thilleman and Spuyten Duyvil Books.

I’ve invited Tod to be on this blog, but before he gets here, let me talk about what he’s done. Spuyten Duyvil has over the last eight years put out close to 100 new books, half poetry, half fiction. He talks about things like “changing literature,” in the face of what Lance rightly points out to be the ways in which the money-presses have abandoned this project. I’ve only come lately to his list, but there’s real good things on it – for instance, Elizabeth Block’s new novel, A Gesture Through Time; also, from a couple years ago, Noam Mor’s Arc: Cleavage of Ghosts. A lot more interesting SD books are also sitting on my shelves, waiting for me to get more time to read! – and all are gorgeously designed.

Tod was in Buffalo this week (where I took photo above) and read from his own novel with SD, Gowanus Canal, Hans Knudsen. Full disclosure, I blurbed the book on SD’s site –

"Gowanus Canal, Hans Knudsen is a novel of ideas unlike most written these days. Knudsen is a new Stephen Daedalus—but lacking a coherent tradition to rebel against as he misfires his way through doctrine and avant garde theatre into a deep sadness, one that exists in direct confrontation with the elated “new new world” of late capitalism. In Knudsen’s world people speak in fits and starts, and understand one another little better. In his portrait of a character ground down in a world where logos have replaced logos, Thilleman gives us a compelling novel, leaving us to clutch after what really matters."

“Unlike most written these days” – when I saw about a half-dozen SD authors read from their works at &Now, the great Innovative Arts (fiction, poetry, performance, music, video) conference just held at Lake Forest College, Illinois, last month), this was a feeling I brought away. In these times when mainstream publishers work mostly from within very basic ideas of what narrative accomplishes, generally assuming a (not very) Creative Non-Fiction model that highlights the importance of author’s biographies in choosing what they bring out – in such an environment, SD publishes what used to be called Serious Fiction. Their writers are contemplative, taking seriously fictive discourse, the ways in which fiction provides ways of knowing about the world. They take questions of the complexity of narrative seriously, understanding that storytelling is the engagement of various threads of narrative, workings of voices, narratives that take us over for their own ends, like the Calvinism that enraptures and possesses Hans Knudsen in Thilleman’s book. In a sense, this is almost a culturally conservative function (if it’s possible to strip that term briefly of its horrible political connotations, especially in the late-Bush era); Modernism, after all, has been with us for about 100 years. The NY publishers have now pretty much waved goodbye to Modernism for good (except for particular books by established writers they believe they can still make a buck off of, or token phenoms like Jonathan Saffran Foer). But this assumes that investigations into narrative practice by 20th century writers were simply fashion, instead of a necessary practice in the advancement of the art. Simply put, the big guys of publishing are no longer interested in Art. That has now become what establishes the necessity of the existence of new small presses like SD, and ennobles them.
Posted by Ted Pelton at 11:39:00 AM

it's as if the discursive practice of making art has been subsumed by consumer culture in our country ... now i want to say "duh," but my point is that you seem to have provided a direct and clear communication about this. muchas gracias.

i'd write that in lithuanian but no one would understand.

and thanks for highlighting sd.

they not only kick ass, they rearrange body parts.